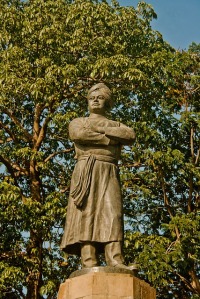 “Blows are what awaken us. In the majority of cases it is misery that teaches more than happiness. It is the heroic endeavor to subdue adverse circumstances that carries our spirit upward.”

“This world is just a gymnasium in which we play; our life is an eternal holiday.”

“The whole secret of existence is to have no fear. Never fear what will become of you.”

“This is the question I put to every man, woman or child: Are you strong? Do you feel strong? Are you getting stronger? We suffer because we are weak.”

“Man has freedom already; but he will have to discover it. He has it but every moment he forgets it.”

My admiration for Vivekananda (1863-1902) began many years ago with my reading a tiny paperback booklet on his teachings that I happened to pick up while in a used bookstore somewhere in the Dakotas desperately searching for something—anything—to read between flights. At that time I was experiencing great outward success in every material way, but was dissatisfied and did not know why. That magical little booklet came to mean a great deal to me, and from it I progressed to a reading of all the hundreds and hundreds of thousands of words spoken by this mesmerizing orator with a gleam in his eye who possessed “a quiet but assured air of command.”

When I find myself going astray (as I too often do) and wandering away from the deep down fundamental things, his words come to mind to rescue me, particularly, be fearless; have no fear, and “Go beyond the trifles of the world. Know that nothing can affect you. It is liberty to be affected by nothing. Be perfectly resigned, perfectly unconcerned.” In other words—if other words are needed—keep your bearings; don’t lose yourself craving what is inessential to you; don’t let superficial things and pettiness touch you; find that your life is more composed of meaningless nonsense than you have ever imagined. I think that if truly understood and taken to heart, these are among the most profound and therapeutic words ever spoken. If you and I were to “go beyond the trifles of the world” most of our worries, anxieties, fears, and doubts would fly out the window. So when things are pressing in on you from all sides and you wish them to stop, say to yourself, “Go beyond the trifles of the world” and watch what happens.

Unlike his mentor Ramakrishna, Vivekananda (born Narendranath Datta in Calcutta, India) was not a mystic. He was a spiritual man and fundamentally a teacher of how to live sincerely and honestly in this real world of work and family without losing sight our spiritual nature. The prophet of self-reliance, he was a person whose words expressed exactly who he was without phoniness, fakery, or pretense. When he died at the age of thirty-nine, the world from beggars to statesmen mourned.

“By means of the constant effort to do good to others we are trying to forget ourselves; this forgetfulness of self is the one great lesson we have to learn in life. Every act of charity, every thought of sympathy, every action of help, every good deed, is taking so much of self-importance away from our little selves.”

”Always keep your mind joyful; if melancholy thoughts come, kick them out.”

“We are responsible for what we are; and whatever we wish ourselves to be we have the power to make ourselves.”

“It is selfishness we should eliminate. I find that whenever I made a mistake in my life, it has always been because self entered into the calculation. Where self has not been involved, my judgment has gone straight to the mark.”

“It is thought which is the propelling force in us. Fill the mind with the highest thoughts, hear them day after day, think them month after month. Never mind failures…they are the beauty of life, these failures.”

“The one way out is through ourselves.“

“Almost all suffering is caused by our not having the power of detachment. We must learn not only to attach the mind to one thing exclusively, but also to detach it at a moment’s notice.”

“In all these little roughnesses that we meet with in life, the highest expression of freedom is to forbear.”

“The goal of all nature is freedom and freedom is to be attained only by perfect unselfishness: every thought, word, or deed, takes us toward the goal. Have no thought for yourself, no word for yourself”

“There is no limit to the powers of the human mind. The more concentrated it is, the more power is brought to bear on one point; that is the secret. In making money, or in worshiping God, or in doing anything, the stronger the power of concentration, the better will that thing be done.”

Vivekananda was little known outside a small circle in India when he appeared at the Parliament of Religions in Chicago in 1893—the first time the leaders of all the world’s major religions were brought together to talk to the public about their religions. Vivekananda had a handsome face and striking appearance and drew attention the morning before he was to speak for the first time. His turn to speak came, but he excused himself and asked for more time. Later he confessed that he had stage fright: the other speakers were prestigious religious leaders who had come prepared. He had arrived with no formal credentials, unknown, with no money, no resources, no place to stay, and hadn’t prepared a speech.

Such was the overwhelming impact of his mere presence on an audience that when in the afternoon he rose to his feet at the podium and began speaking with that extraordinarily deep bell-like voice, saying “Sisters and Brothers of America,” the reaction was astonishing. Instantly the entire audience—many hundreds of people— clapped and cheered wildly. Nothing like that had occurred at the conference though all the other speakers were better known. The audience must have sensed they were about to hear the most valuable words of a most exceptional human being.

6 responses to “Vivekananda: Practical Thoughts of an Exceptional Man”