Serendipity in a Creator’s Life

My journey on the life path of the writer (you may be on a creator’s life path too)–studying writers and the writer’s life, and writing and reading a great 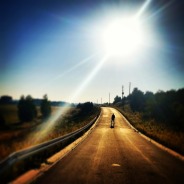 deal of my time, setting writing as a high priority in my life; thinking of it all the time; sacrificing for it—was shaped by serendipitous experiences which are probably not very different from yours.

In the third grade when I was seven, the teacher, Miss Gross, stood at the front of the room and read to the class my theme–I’d described playing football. I’d said when I was tackled “I fell to the ground like a blob of jelly coming out of a jar.” Miss Gross said to the class. “David has used poetic language. He’s written what’s called a simile.” That single little event—her saying that and showing admiration for those few words,  and making me feel that it was somehow worth commenting on—immediately sparked something in me, let something  break free in me.

Running home down the street after school feeling wonderful and liberated—when I was young I was almost always running–I decided I would become a writer if there were such people and make similes as often as I wanted all the rest of my life. Miss Gross then encouraged me and worked with me and nurtured me. She arranged for my stories and poems to be published in newspapers and magazines. She asked me to apply myself and work hard at the writer’s craft. I was awarded first prize in a regional essay contest.

At about the age of nine I happened to be playing in front of the TV instead of playing tag outside with my brother and sisters when an old black and white English movie came on.  I knew nothing about acting, but there was one actor

on the screen who I could see was doing something remarkable. He was just different, unlike any of the other actors, though I couldn’t say how. But I could see that something right there on the screen. What he was doing, how he was acting, the impression he was making made me feel a sensation which I now know was awe. I realized I was watching some exceptional thing I had never seen in movies before, in my life before. I pointed to him and asked my mother who that was. She was a movie buff. She knew. “That’s Laurence Olivier. He’s the greatest actor in the world.” Even so young I had recognized supreme mastery, the highest attainment of an art.

I decided that I wanted one day to be able to affect people the way his performance had affected me—he had made me gasp. And I thought the best way to do that was to write things so beautiful that people would gasp too. A major event for me in college involved another teacher, Dr. Hunt, a well-known visiting professor of creative writing who one day read to the class a piece I’d written. (The assignment was to describe a person by describing a piece of clothing they were wearing, and I wrote “My Father’s Corduroy Jacket,” the best writing I’d done to date.)  When she finished reading, she said, “A teacher waits her entire career for a student who can write like this.”  She had me visit her in her office and helped get my work in a prestigious literary journal. So there was my second encouraging Miss Gross who happened to be on the faculty for one semester—the same semester it fit my schedule to take her class.

To create beauty—to write beautiful poems and stories—I decided depended on how moving the subject was and also the beauty it was expressed with, and

I placed a great deal of emphasis on the imagery in the writing.  In college I’d read Gerard Manley Hopkins’ “God’s Grandeur,” and was greatly impressed with its beautiful language. I never forgot Hopkins and years later (before Amazon.com or Barnes & Noble) I had the urge to read a book studying his imagery so that it might affect my imagery. Wherever I traveled—and I did extensively, big cities, small towns–I visited new and used bookstores and in every bookstore I browsed for such a book, but never found it.

Once I was to give a speech in Rock Island, Illinois. It’s a small city in the western part of the state that I had never visited before. I discovered that the hotel I was to stay in had just been built and had opened its doors only a few

days before. It had hosted a conference for fire fighters. The attendees had left just the day before. The event at which I was to speak came next. I arrived at midnight and was given the only available room. I laid my bags on the bed, and then noticed something in the trash basket. Apparently it had been left by one of the firefighters and the maid had overlooked it when she cleaned the room.  There it was: a full-length book on the imagery of Gerard Manley Hopkins—another serendipitous event, the only available room, a fire fighter who liked Hopkins too, and a maid who’d forgotten about a trash basket.

That night I’d had it; I couldn’t work another minute, stoic though I am; could not pull from my agonized brain another word. I quietly so as not to wake anyone left my home at about 3:00 a.m. and walked the Chicago streets trying to decide if I wanted to continue leading a grueling, neglectful life like that or follow a more conventional life, committing myself to “a regular 9-5 job.” It was a cool, pleasant night—very dark—with a soft, filmy mist in the air. Should I continue a writer’s difficult life?  Should I just finish this book and give it all up?

Then I noticed ahead of me something on the sidewalk precisely in the middle of a pool of bright white light cast by a street lamp, as though it had somehow 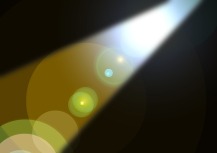 been known that I would find my way to that little street, and that object—whatever it was–had been placed there as though in a spotlight very carefully for me and me alone to see. I went to it and bent down and picked it up. It was a book—of all things a book–not a glove someone had dropped, or a scarf, but a new, thick hard-cover book. You see: I could not get away from the written word. I took this as a serendipitous sign that like it or not a writer’s life—imperfect, isolated, and much too demanding–was my identity and that it was futile for me to think writing would ever not be at the center of my existence.

It was a waste of time to imagine that I could ever get away from a life that had been shaped by Miss Gross, Laurence Olivier, Dr. Hunt, a literary fire fighter and forgetful maid, and the lesson of that book left for me in the pool of white light late at night on a Chicago street.

I’m sure you’ve had similar serendipitous experiences steering you straight to the craft you love and will always love–your writing, painting, acting, dancing, singing. And if you have the time I’d love to hear about them.