with their powerful and constant and sometimes obsessive need to work at their craft so they might improve and be more successful are the hardest working and most productive individuals on this planet.

That’s all true, but today my plan is to not produce a thing.

Today I will explore the joys of wasting time.

When I was a business consultant giving presentations to executives I’d say “Ladies and gentlemen I have utmost respect for your capacity for work, and I know you think you’re a hard worker. But you should spend a day with a ballerina. Then you’ll see what it means to work hard.” I’d ask, “For example, how many of you feel so strongly about reaching excellence that you’d practice till your poor muscles screamed and your feet bled?”

But I’m going to waste time all day. I’ll just see what happens.

A number of studies comparing novices with experts in most fields support the idea that because of their great knowledge and skill, experts are able to accomplish with almost no effort what non-experts can accomplish only with difficulty or can’t accomplish at all. That’s just common sense, isn’t it?

But common sense or not, that’s not true of artistic work. In fact, the opposite is true. Expert artists of all sorts—you very well may be one–work harder, not less hard than non-experts.  So: 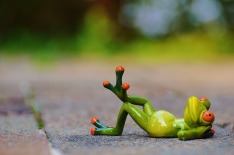 decided to play hooky. I’m playing over again and again Simply Red singing the exciting “Fairground” and I feel terrific.  I’m writing this and don’t have the faintest idea where I’m going with it, and that feels great. I feel free, as if I’m in a forest as the Zen people say sitting quietly under a tree, doing nothing, while the roses grow by themselves.

At the moment it’s 2:10 p.m. In a few hours my wife Diana will be coming home and we’ll go out to eat. But first I want to finish this, wherever it’s taking me.

My “Let’s accomplish absolutely nothing today” rebellious mood began this morning when I woke up in yesterday’s street clothes on the couch at five according to the TV I’d left on all night. I just lay there and thought of my goals for the day, the way I start every day—take a look at the long email an editor sent and write a response thanking him, and continue finishing up my book I’ve designed for those whom I call “Stage Three Creators” who are not Stage One or Stage Two creators.

(If you’re curious, according to me:

But I could tell my goal-setting mind and my I’m-all-set-to- work-let’s-get-the-show-on-the-road mind weren’t synchronized today. So my normal write-read-study daily schedule was tossed out the window and I thought, “For today at least, good riddance.  I think I’ll just putter around the house without feeling guilty.”

I can’t be away from written words for more than a few hours. So I went downstairs to my bookcases and tried to find something that would make me

feel I’d gotten something out of the day even if I didn’t write a word. I passed up Chekhov, Virginia Woolf, Ernest Hemingway’s Death in The Afternoon, which I’d never read, and Flannery O’Connor whom I’ve never read, and John Cheever’s collected stories and Raymond Carver’s Cathedral, and so forth.

And there packed in among all my so-many books I saw that little paperback my father had bought me that early autumn afternoon he’d taken my older brother John and me for a commercial boat ride on Lake Michigan when I was eight or nine, I think—The Great Short Stories of Robert Louis Stevenson. Ten brilliant tales by the best-loved storyteller of all time, the book says. Dad had taken us to a book store in Chicago’s downtown (which we Chicagoans call The Loop) before the boat ride and told us completely by surprise that we could each pick out any book we wanted and he would give it to us. We weren’t rich. What a luxury for me to have my own book.

It was the first book I’d ever owned, that I’d taken my time going through the store and picked out myself. I can remember as though it is happening now looking over the racks for the right book—will it be this one or that one? I looked at the book’s price this morning—35 cents—and at the copyright date—so long ago. The pages are brown and the paper is brittle. The cover is bent but not torn. Through the years I’ve taken good care of it. Wherever I’ve moved, whatever heaven or hell I was going through, it’s come along. How could I possibly be without it?

What pleasure it gives me to see that little book again and to hold it in my hands. It meant so much to me that day. During the boat ride (the boat was named The Blue Dog) I remember that I could hardly take my eyes off the book though it was a lovely day, the sunlight reflected so brightly off the towering buildings along Chicago’s luscious skyline, the surface of the lake blue-gray and green. But it was my book, the first book that I alone had picked out and now could read as many times as I wanted and could keep.

It’s back to work tomorrow for me, but now I’m thinking I don’t know if my father giving me that book was in any way instrumental in setting me off in the direction of a writer’s life. But here I am thoroughly, completely, and irrevocably a writer. And I’ve never since childhood wanted to be anything but.