The Weakness Many Writers Don’t Know They Have: Ideas and Models for Describing Places in Your Writing

Many writers have a weakness, but are not aware of it. They fall short when they describe places. Their places don’t seem real and are not vivid

or accurate. They are not interesting. Because of an inadequate handling of places, a work that may be superb in every other respect is without convincingly-described locations, scenes, and settings. Descriptions of places are not window dressing that a writer need pay little attention to, but a feature of writing fiction, nonfiction, and drama that is indispensable. Poorly written descriptions of places detract from the quality of the written piece.

When you read a description of place by someone such as Joseph Conrad, Charles Dickens, Virginia Woolf, or Ernest Hemingway, who has elevated that skill to the level of art, you are impressed. You read the description more than once. You think, “This person can really write.” You realize that giving attention to skillfully composing your book’s or story’s places will enhance the works that you are striving so hard to make readable, enjoyable, salable.

Award-winning short story specialist Eudora Welty did more than anyone else to point out how central to effective fiction place is. She said that the story’s place affects “all currents” of the work, all of its emotions, beliefs, and moral convictions that “charge out from the story” as the author unfolds it. She said the places should always be identified, and adds that they should be described in a particular way that requires significant writing skills.

They should be described concretely.

They should be described exactly.

To describe places concretely and exactly requires the writer to be patient and take time writing about the places and not dismiss them with a few vague words. It is worthwhile to pay attention to places in works you read so you might learn from them. Don’t hurry through them. Study them. See how they are so skillfully put together.

Look at the places in writing you are working on, especially the work you are submitting to publishers or intend to publish yourself, and make sure places are both concrete and exact.

Some Writers, Poets, and Artists Are Known for Their Places 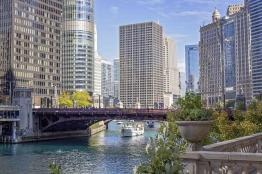 Place has been particularly important to some noted authors. You cannot imagine the story’s characters without the place where the author has put them:  Dublin  to James Joyce, small town and rural Mississippi to Eudora Welty and William Faulkner, Paris,  Spain, and Africa to Ernest Hemingway, Camden, Ohio to Sherwood Anderson, southern United States to Truman Capote, James Agee, Reynolds Price, Pat Conroy, and many other “Southern writers,“ the plains of Nebraska to Willa Cather, Chicago to Saul Bellow, the Mississippi River to Mark Twain, the English moors to Charlotte Bronte and sister Emily,  eighteenth century London to Charles Dickens, Mexico and the state of Texas to Katherine Anne Porter,  Los Angeles to mystery writer Raymond Chandler, and so on.

Places are very important to poets too: America is Walt Whitman’s subject, and Patterson, New Jersey is special to William Carlos Williams. And a place may be a favorite subject of painters: his gardens to Claude Monet, the hill visible from his window to Paul Cezanne.

Below are places from my life I have described in stories I’ve written: 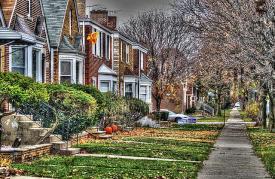 (My father was an air raid warden during World War II, and once he took me with him during an air raid practice when the lights of the city were turned off and the skies were filled with search lights) “My father and I turned and came up behind the church where a delivery truck was parked. We walked down the alley, keeping our eyes trained on the apartment buildings’ windows, past the empty lot overgrown with weeds and covered with tin cans and newspapers, and past the bent-in-half, arthritic and reclusive witch’s bleak house. Her ferociously unfriendly German shepherds were oddly quiet. We passed the drowsy homes and apartment buildings of neighbors, only some of whose names we knew. Behind the walls of those buildings were people not unlike us, simple people, all with the stories of their lives never to be written.  All shades were drawn, and so the night was perfect, with no more reminders necessary.

My father stopped to look straight up through the drizzle again and then so did I. Between the sweeping beams of the search lights, white stars 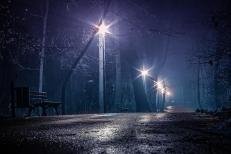 and a full moon dangled in the sky. On the back porches in neat array, like miniature glass sentinels, stood the empty bottles left out for the milk man.  Branches of trees laden with rain bent low over back fences like old women on canes. When the wind blew, the leaves showered the two of us with water, and we laughed. On the ground lay deep puddles that we had no choice but to step through, which was fine with me because I was wearing boots. My father’s shoes made squishing sounds and he said,” Another pair down the drain” and we laughed at that, and I splashed through, heavy-footed.”

Chicago on a Summer Night

“It was a typical August night in the city, a moonlit night that if you lived in that part of the country you knew intuitively would witness a drop in temperature that would turn a blistering hot day cold almost precisely one minute after the stroke of twelve. In the air circulating on a breeze were fish smells from the beaches of Lake Michigan that were coming into view as we walked through a park that had a merry-go-round and 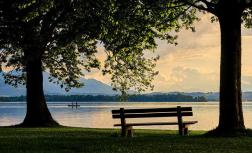 swings. The night had taken on an indefinable splendor and given me a feeling of exquisite peace that I hadn’t felt since childhood. I saw a white yacht that was illuminated by deck lights out on the lake.  Small waves rocked a rowboat that was not very far from me. With a whoosh, waves tumbled over themselves onto a beach.  A bell chimed somewhere on the water. There was a splash and then another. The vivacious woman I was with took off her shirt and bra and swung them over her head like a lasso. She said, “Guess what I do for a living.” I said, “I’ll bet you four million dollars that you are an actress.”

A Bar in a Town in Montana, United States

After we graduated from high school my good friend Nick and I–he eighteen, I seventeen–decided to ride freight trains for a while.  A train heading west came along and we hopped it.

“Down the wide main street and prominently visible from our freight train that had just pulled in, the alluring green neon sign of the Welcome Inn burned brightly. It was a small, squat, one-story square log building that night and day hummed and trembled with pulsing music and in which who knew what went on. But we were curious to find out. We entered that tumult of sweat and whiskey, amidst the glow of the red bar lights and clouds of floating cigarette smoke, and stood at the bar next to a tattooed woman snapping a bull whip and wearing a black satin cape with shining red lining, and saw a man with a chin scar and an eye-patch get angry and pull a pistol on another man. The second man took the gun away from the first and slugged him over the head. He turned to us disgusted with his friend, who lay dazed and prone on the floor, people stepping over him, and said, not in any way angry, “He’s always doing that,” and that was the end of that.

Old cars with dented fenders and gaudy garters dangling on their rear-view mirrors and pick-up trucks with rifle racks cradling ominous shotguns and carbines were parked four deep in the lot. When the door of the Inn swung open, muscular men, their shirt sleeves rolled up above the bicep, sauntered out arrogantly, their arms tight around the waists of conspicuously made-up women, their heads thrown back in exaltation and abandon, and the chime of laughter spilled into the night like flowing wine.”

The College Town Where I Lived

“… a small drowsy college set in a little town of narrow, winding cobblestone streets crowded with lovely old gnarled oaks, maples, and sycamores and wild, untrimmed hedges. Pinnacles, domes, and spires of church towers, like the great cathedrals of Europe, rose gradually and wonderfully and were visible everywhere. In the yards, along crumbling stone fences sprouting moss, lichens, and ferns, were an abundance of rose gardens that were sadly withered at that time of year. The town was surrounded on all sides by tractors and threshers left overnight by farmers in wheat fields, and the campus was split in two by a river with an Indian name.”

Excellent writers should be able to describe places that they have experienced or have heard or read about and can clearly envision as they compose. They should be able to create vivid descriptions that enliven the text and appeal to the reader’s senses.