Writers and Shyness:  Anton Chekhov, Master of the Short Story

I think it’s well established that wherever they been born and bred, many writers–young, middle-age, or old–are shy. Certainly I personally have met and read about scores who are. Shy writers may be far more prevalent than we realize. Shy writers and shy artists, actors, dancers, soloists, and composers are well documented and may in fact be the rule rather than the exception in the world of artistically creative people.

As is true of all complex psychological characteristics, it is not easy to assess why a man, woman, or child is shy–what causes it– possibly particularly for the person who is shy and tries to understand why. Causes are part genetic and part environmental–that’s known; but that insight doesn’t tell us much about writers and shyness. Does serious writing (painting, acting, composing etc.)–possibly in an occupation–attract shy people because it requires so much introspection, savage self-criticism, and living much of the time in your head just as shy people do?  Can shyness be outgrown? I think so. I’ve seen that happen.

Shy writers may puzzle us and make us think, “Why in the world should she (he) be shy?” when they possess all the qualities that should result in a more socially self-assured and confident person, (and confidence is so crucial to a creative.) They have qualities some people would flaunt, such as prodigious and unique giftedness, highly developed 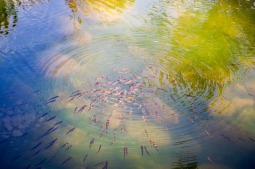 skill, physical attractiveness, stunning achievements, exceptional intelligence, and disarming charm. Yet many shy writers, from the most famous to the least famous, despite having everything a person could want, are chronically ill at ease in any spotlight, and can’t remember a time when they weren’t. They try their best to avoid drawing attention to themselves, and are dismayed or depressed when they can’t.

Of all the world’s short story writers, Russian Anton Chekhov (1860-1904), is generally acknowledged to be the best. By the age of twenty-six he was a national celebrity; fingers were pointed at him wherever he went.   He never failed at anything, for example transitioning without any apparent effort from great fiction to great drama. He was cultured, well educated, and intellectually brilliant, the most popular Russian writer of his generation, and unlike most of us other humans, never suffered great sorrow. Yet he was shy.

His shyness might explain his hatred of personal appearances, promotions, exposure, and publicity. He refused to do readings: “I don’t recite…If I do it for three or five minutes my mouth dries up, my voice grows hoarse, and I can’t stop coughing;” “I recite abominably  The main thing is I’m terrified. There’s a complaint called ‘fear of open spaces;’ well, I suffer from fear of the public and publicity.”

He was an innovator whose ideas on the art of short fiction–extraordinary economy of language, objectivity and complete absence of moralizing, lyricism, blurring of the boundary between protagonist and author, understatement, extremely brief openings (two or three lines at most) or none at all, surprising detail in physical description, repetition of key words, inconclusive endings–have become standard practice, changing the way that genre is created.

As an adult he had all the requirements of happiness. But it is possible that an absence of affection in his childhood permanently stunted his personality. He wrote: “So little affection came my way as a child that I treat caresses as something unfamiliar, and almost beyond my ken, now that I’m grown up. That’s why I can’t show fondness for others, much as I’d like to.” Extreme holding back of emotions, introversion, social discomfort, and self-effacement distinguished the mature Chekhov.

He said, “Father began teaching, or to put it bluntly, beating me before I was five. He birched me, boxed my ears, clouted my head, and when I woke up each morning I’d wonder if I’d be beaten that day. My brother and I were forbidden to play and lark about.” He described himself as “a serf’s son, a one-time shop boy (his father was a struggling, eventually bankrupt grocer), public school student, brought up to worship rank, to kiss priest’s hands, to defer  to other people, who said thank you for every bite of food, who was often beaten, who had no galoshes to wear.”

Chekhov began what was to become, unexpectedly, a literary career as a struggling medical school student who submitted short comic pieces to humor publications.  Later, as a serious writer, he was to say that his early comic works

“exhibited no characteristic beyond silliness.” Soon he was writing a popular and widely discussed column of comic tales. But, he said, he was “bored stiff and longed to give it up,” much as he needed the fifteen rubles a month which it earned him. His creative imagination was so fertile that he bragged that he could select any subject at random, “an ash tray or even a wall” and make a story of it. He said all he thought about other than stories was “Money. Money. Money.” He vowed he would not die a journalist, an occupation of “scoundrels.”

He maintained a medical practice, and his identity as an author  cannot be understood in isolation from that of Chekhov the physician. He wrote, “Medicine is my lawful wife, and literature my mistress.” He never asked for payment from struggling people in the arts. His medical practice supplied him with material, bringing him into close contact with people from all levels of society, and did so at times of crisis when they were too much under pressure to wear their usual masks. For a writer who specialized in detaching characters from their illusions about themselves that was invaluable.  But he neglected his own health though he was aware that he was tubercular, and that that more than likely would be the cause of his death, as it was to be.

In 1886 veteran novelist Dmitry Grigorovich hailed Chekhov as a writer of genius with a remarkable literary career in store for him if he did not waste his talent writing trifles. Grigorovich wrote to Chekhov: “Judging by the different

qualities of your undoubted talent, your true feeling of inner analysis, your masterly descriptive passages, the way in which you give a complete picture of a cloud at sunset in a few words, etc., you are destined, I am quite sure, to become the author of many excellent and truly artistic works.” It was Grigorovich’s letter that finally decided Chekhov to be more serious about his work, and to devote all his time to literature.

He turned away from writing comedies to more serious, literary writing, and then his stories became almost without exception perfect works of art. Publications asked him to name his own price. Chekhov responded with modesty, reserve, and anxiety. According to biographer Ronald Hingley, “There was no true satisfaction for him in all this fuss. He was meeting too many people; he felt over-praised,” in the way American novelist Walker Percy would feel seventy years later when he wrote, “Reading reviews of your own book is…a no-win game. If the review is flattering one tends to feel vain and uneasy.” At the age of twenty-nine, when he wrote the memorable “A Dreary Story,” Chekhov had firmly established himself as the finest active Russian fiction-writer of his generation.

When abruptly Chekhov’s stories began becoming widely popular and catapulted him from obscurity to celebrity something happened to him that he hadn’t expected. He became self-conscious and unsure of himself.  He said:

“Formerly when I didn’t know that they read my tales and passed judgment on them, I wrote serenely, just the way I eat pancakes. Now I am afraid when I write.”  Janet Malcolm: “His letters of that period have a feverish, manic quality…He is alternately boastful and fearful. Chekhov’s letters now also begin to express his ambivalence toward writing that was to remain with him. They suggest that the literary artist…is doing something unnatural…Chekhov would often talk of idleness as the only form of happiness.” A similar tension between writing as legitimate work for a person to do appears in the biographies of many working class and middle class writers.  Chekhov resolved his dilemma by slowing down and going at his work with more seriousness.

Praise of his work only irritated him because he doubted the critical abilities of those who praised him: “I yearn to hide somewhere for five years or so and tackle serious, meticulous work. I need to study, to learn everything from the very beginning because I am a complete ignoramous as a writer. I need to write…sixteen pages in five months, not eighty pages in one month.” Very self-critical,, he wrote, “For two years I’ve disliked seeing my work in print. I couldn’t care less about reviews, literary chat, gossip, success, failure, high fees.”

He ascribed to himself laziness, apathy, and idleness: “My flame burns low and steady without flaring and crackling. That’s why I never dash off fifty or sixty pages in a night, or get so absorbed in work as not to go to bed when I am tired. And that’s why I never do anything outstandingly stupid or remarkably brilliant. I think that if I lived another fifty years 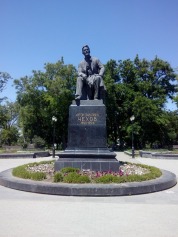 and spent all the time reading, reading, reading, and learning to write well…which means economically, then I’d bombard you all from a vast canon which would shake the heavens. But as it is, I am a pygmy like everyone else,” “Everything I’ve so far written is nothing compared with what I’d like to write.”

His personality’s reserve was so profound that he found it extremely difficult to establish intimate friendships with anyone, man or woman. Everyone closest to him was always aware of a certain distance that couldn’t be broached. Famous, renowned, envied, he had not a single friend. An acquaintance said, “He never opened his soul to anyone.” Chekhov was capable of touching deep emotions in his writing but was not able to make intimate contact with anyone in his real life.

But with his difficulties his achievements in the craft of short fiction are yet unsurpassed.

7 responses to “Writers and Shyness:  Anton Chekhov, Master of the Short Story”