Whenever I look at the work of the creative people who follow my blog –and I do often–I marvel.  I think, “There are so many talented people—she there in Australia and she in England are talented and he in Ireland is talented. Just look at that French woman’s work; it’s beautiful. That Russian woman is so accomplished; everything about her work is just right; it was created by a tremendously talented human being.”

But I know that the finished products that I admire so are far from the whole story because no outstanding creative achievement has ever been produced without a lot of effort on the part of the creator, however much natural talent he or she possesses. Hesiod, a poet who lived several hundred years before Plato, showing great insight into the creative life, wrote, “Before the gates of excellence the gods have placed sweat; long is the road thereto and rough and steep at first; but when the heights are reached, then there is ease though grievously hard in the winning.”

The existence of some creative people is organized completely around their work—they think about it all the time, even when they are not working. Even,

research shows, when they are asleep. And their ability to produce it is staggering. But many prodigiously gifted artists, writers, dancers, and actors don’t end up where they belong–in the upper echelons of their field—for the sole reason that they don’t sweat enough.

They are not willing to travel the long, rough, steep, grievously hard road to high expertise. After Michelangelo died someone found a paper on which he’d written in his old age to his apprentice, “Draw, Antonio, draw, draw Antonio and do not waste time.” Without sweating sufficiently you won’t go far. In every field, experts work harder, not less hard than non-experts.

A common notion among laymen is that the main cause of creative success is natural talent one is born with, and that a major cause of failure is the lack of talent. But the most eminent people in any field, including creative work, generally attribute their success to high ability and high effort and attribute failure to lack of effort, saying that a person’s success comes mainly from ability combined with hard work over a long period of time.

If they fail, the goal of excellence they’re pursuing becomes even more attractive to them. They get hungrier to succeed. If things don’t turn out well they don’t believe it’s because they aren’t capable. It’s because they didn’t sweat enough. They apply themselves; they work harder; they sweat more. That brings them hope. Optimism is kept high, for effort is a virtually limitless resource. You can always work harder.

Less successful creator’s thinking is “Either you have talent or you don’t.” Talent is not something they feel they can improve, so they don’t attempt to, even though they may have the potential to develop their talent to a very high level. It’s as though they are not aware that one’s level of talent is not fixed forever at some point and unchangeable. As your talent increases, as it will through conscientious education, training, experience, and practice, the probability that you’ll successfully reach your creative goals increases—paintings in galleries, books published, roles gotten– and your ability to perform more ambitious and difficult creative tasks also increases.

Most of the time the creators around you will have one of these attributes, either talent or sweat, but not both. If you do have both you have a tremendous advantage. 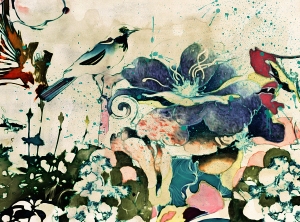 The effective way to develop your talent is not to blindly put in more hours working on this and that, but to take time to identify the small number of main skills most related to success in your field and practice them over and over and over until they become your main strengths, hopefully under the guidance of a knowledgeable person.  For example, a characteristic of successful writers is often a rich and varied vocabulary. To improve your writing you might wish to develop your talent along those lines. So important is an appealing writing style to a writer that J.A. Spender said, ”If you are getting the worst of it in an argument with a literary man, always attack his style. That’ll touch him if nothing else will.” The same is true of painters and performers.  Strive to refine your style or styles so they are recognized as yours. Some artists, such as Georgiana Romanovna, featured in this post, have multiple styles, but their work is always recognizable as theirs.

Most people in the world—whatever their field– can be divided psychologically into two broad groups. There is the minority who are willing to work hard to achieve something. Some creators are capable of producing ten, fifteen, twenty-five times more than others. And then there are the majority who don’t work hard. If you work hard, at the bare minimum you’ll be good at whatever you do.

Creators who love to work, enjoy sweating, and are confident they have what it takes to attain success are rare. If you are one you have a major advantage over other painters, writers, performers, etc. who believe high talent is an unreachable dream for them and that sweating is unpleasant.

20 responses to “Creative Talent and Sweat”